Wrestling with Nature – Science and Religion 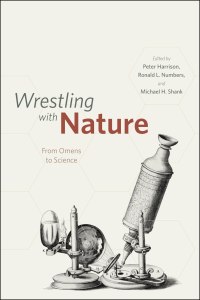 Wrestling with Nature: From Omens to Science (2011) uses the popular-case study format to examine “how students of nature themselves have understood and represented their work.” The essays are thematic but roughly chronological, beginning with “natural knowledge in ancient Mesopotamia” (Francesca Rochberg), moves on to “natural knowledge in the Classical World” (Daryn Lehoux), and then two essays on natural knowledge in the “Arabic Middle Ages” (Jon McGinnis) and “Latin Middle Ages” (Michael H. Shank). The book then transitions into the Renaissance and early modern periods with essays on “Natural History” (Peter Harrison), “Mixed Mathematics” (Peter Dear), and “Natural Philosophy” (John L. Heilbron). The second half of the book is less chronological and more thematic, concentrating on how “science” demarcated its territory, separating itself from other ways of understanding or manipulating the natural world, particularly in the nineteenth century. Here we find essays on “Science and Medicine” (Ronald L. Numbers), “Science and Technology” (Ronald R. Kline), “Science and Religion” (Jon H. Roberts), “Science, Pseudoscience, and Science Falsely So-Called” (Ronald L. Numbers and Daniel P. Thurs), and “Scientific Methods” (Daniel P. Thurs). The book concludes, as with the previous book reviewed on this blog, with essays by Bernard Lightman (“Science the Public”) and David N. Livingstone (“Science and Place”).

Here I want to focus only on three chapters I found particularly interesting. Roberts in “Science and Religion” observes that in recent years studies on relating science and religion “has become hot.” Everyone is doing it: from colleges and universities, journals and newsletters, organizations and think tanks, to books and magazines—everyone is talking about “science and religion.”

But “prior to about the middle of the nineteenth century, the trope ‘science and religion’ was virtually nonexistent.” The two only came together when both terms attained modern form. We have seen this argument before. Here Roberts emphasizes that it was “elite members” of the church who devoted themselves to theology, whereas “most adherents” treated “religion” primarily as a “life of piety and communal devotion and a set of ritual practices.” This however contradicts what Jaroslav Pelikan, Claude Welch, and many others (including Roberts himself, only a few pages further down) have said on the matter of creeds and dogma throughout the history of the Christian church.

The tracing of “science” is less contested. Roberts claims that “God-talk” was once central in the work of natural philosophers. But as early as the mid-eighteenth century, an “ever-growing number of investigators in the realms of natural philosophy and natural history began making determined efforts to pursue their inquiries untrammeled by concern with the testimony of biblical narrative.” By substituting “natural laws” for divine agency, “men of science” began “bringing all phenomena within the scope of natural laws and secondary causes,” a view that would become known as “methodological naturalism.”

But it was during the late nineteenth century where “science” underwent its most significant constriction. Once thought of as “systematized knowledge,” it was restricted to “empirical investigation of natural (and sometimes social) phenomena.” Many intellectuals at this time began casting science and theology as distinctly different enterprises. Thus John William Draper conceived science and religion as “two contending powers, the expansive force of the human intellect on one side, and the compression arising from traditionary faith and human interests on the other.” By the end of the century, a deluge of books and articles addressing “science and religion” swept across the Anglo American landscape.

Conceptualizing science and religion as distinct entities with distinct enterprises led to their ultimate separation. Friedrich Schleiermacher and Immanuel Kant, for example, located religion in “a sense of contingency, or dependence,” in the “feelings associated with the human condition.” Albrecht Ritschl held that religion and science “appealed to different elements of human experience.” Twentieth-century Anglo American liberal Protestants often stressed inner experience and minimized doctrinal beliefs, in what Pelikan has acutely called the “discomfort with creed caused by the consciousness of modernity.” We see this sentiment in Andrew Dickson White’s qualifications that the villain was not “religion”—which defined as “the love of God and of our neighbor”—but “Dogmatic Theology.” This distinction, Roberts tells us, “became increasingly common among liberal Christians, including scientists, in the United States and Great Britain during the half century after 1890.” Science and religion had become “separate spheres of experiential data.”

Many Christians rejected such artificial separation. Charles Hodge, J. Gresham Machen, and William Jennings Bryan were only a few of many who called for a more traditional, “Baconian” conception of science, one that would include theology among the sciences. In the 1920s “fundamentalism” emerged, pushing for a conception of science that would ban teaching evolution in public schools. But there were also more peaceful separatists. In 1923 Robert A. Milikan and a group of scientists, clergymen, and theologians signed a “Joint Statement upon the Relations of Science and Religion,” which maintained that science and religion “meet distinct human needs” and thus “supplement rather than displace or oppose each other.”

Between the two world wars, many theologians, and even some scientists, “insisted that the natural world served as an appropriate object for theological reflection.” For example, F.R. Tennant, Sir James Jeans, Arthur F. Smethrust, William Grosvenor Pollard, and Ian Barbour essentially called for a “re-merging of the spheres” of science and religion. Some conservative Protestants even began reasserting the theological perspective to once again bear on our understanding of the natural world.

More recently, the rise of young-earth creationists, who aggressively contest the notion that the “vocabulary of modern science” alone “provides an adequate description of the natural world,” has appealed to philosophers of science such as Karl Popper and Thomas Kuhn, who have even suggested that “creationism constitutes a ‘research program’ no less rigorously ‘scientific’ than Darwinism.” This in turn encouraged creationists to demand “equal time” in the public classroom. On the other side, “militance among proponents of scientific naturalism has also escalated.” Scientists such as Steven Weinberg, Stephen Hawking, Richard Dawkins, Richard Lewontin, Edward O. Wilson, Francis Crick, and philosopher Daniel Dennett, “have dismissed, even scorned, the beliefs of orthodox Christians.”

More measured minds have resisted such efforts to compartmentalize science and religion. From theologians, philosophers, sociologists, to historians of science, these thinkers have called for a more contextualized understanding of science and religion. “Most modern intellectuals,” concludes Roberts, “have joined their predecessors in assuming that both enterprises possess distinctive elements and in exploring their interrelationship.” This congenial conclusion may strike one as deeply unsatisfying, however, especially in light of the fact that the fastest-growing religious category in the United States is what are called “nones“—people who say they have no religious affiliation—or the explosion of New Atheist “churches,” which proselytize “science” and calls to “unconversion.”