T.H. Huxley’s Puzzling use of Nature 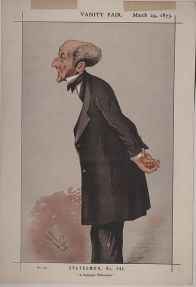 Thomas Henry Huxley’s (1825-1895) use of the term “Nature” was curiously inconsistent. According to Oma Stanley, in his “T.H. Huxley’s Treatment of ‘Nature'” (1957), “all discussions of Nature made before 1871, Huxley treated the subject from the romantic point of view; and that from 1876 onward, his attitude was scientific.”

In 1869 Huxley had translated Johann Wolfgang von Goethe’s Aphorisms on Nature (c. 1786) for the first issue of Norman Lockyer’s (1836-1920) journal, Nature. At the end of the article, Huxley himself comments:

When my friend, the Editor of NATURE, asked me to write an opening article for his first number, there came into my mind this wonderful rhapsody on “Nature,” which has been a delight to me from my youth up. It seemed to me that no more fitting preface could be put before a Journal, which aims to mirror the progress of that fashioning by Nature of a picture of herself, in the mind of man, which we call the progress of science.

An earlier instance of Huxley’s metaphorical use of Nature occurs in his essay “On the Advisableness of Improving Natural Knowledge” (1866). Here Huxley insists that

Natural knowledge is no real mother of mankind, bringing them up with kindness, and, if needs be, with sternness, in the way they should go, and instructing them in all things needful for their welfare; but a sort of fairy godmother, ready to furnish her pets with shoes of swiftness, swords of sharpness, and omnipotent Aladdin’s lamps, so that they may have telegraphs to Saturn, and see the other side of the moon, and thank God they are better than their benighted ancestors.

In his “A Liberal Education and Where to Find it” (1868), Huxley argued that a true “education is knowledge of the laws of Nature.” Man plays a game of chess against Nature for his life, fortune, and happiness. But man must bring himself into “harmony with Nature.” He achieves this with self-discipline and trained passions. Stanley points out, “Huxley goes so far as to say here that the moral laws of men are grounded in Nature: ‘…there lies in the nature of things [Huxley writes] a reason for every moral law, as cogent and as well defined as that which underlies every physical law.'”

Another example of nature personified is found in Huxley’s essay “On the Formation of Coal” (1870). He writes, “Nature is never in a hurry and seems to have had always before her eyes the adage, ‘Keep a thing long enough, and you will find a use for it.'” Nature has “kept her beds of coal many millions of years without being able to find much use for them; she has sent them down beneath the sea, and the sea-beasts could make nothing of them…” and so on.

After 1876, Nature as animate surceases in Huxley’s writings. Why the change of heart? The mid-seventies is marked by an event of some significance, Stanley suggests: the posthumous publication in 1874 of John Stuart Mill’s essay, “Nature,” which had been completed in 1854. Although there is no direct evidence of Huxley having read Mill’s essay, Stanley ventures the position that “Huxley’s own handling of the subject before and after the appearance of Mill’s essay suggests that he knew it and that he changed his way of writing about Nature partly as a result of reading Mill.”

Like Mill, for example, Huxley, in his “The Three Hypotheses Respecting the History of Nature” (1876) claims that Nature is a “system of things of immense diversity and perplexity”; and of the “conception of the constancy of the order of Nature.” This point of view, Stanley tells us, is “scientific, [and] not at all romantic.”

In his Hume, With Helps to the Study of Berkeley (1878), Huxley writes that “‘nature’ means neither more nor less than that which is; the sum of phenomena presented to our experience; the totality of events past, present, and to come. Every event must be taken to be a part of nature until proof to the contrary is supplied. And such proof is, from the nature of the case, impossible.” According to Stanley, Huxley’s vocabulary here matches Mill’s essay.

In “The Struggle for Existence in Human Society” (1888), Huxley speaks of Nature as “the vast and varied procession of events…[it] is neither moral nor immoral, but non-moral…in the strict sense of the word ‘nature,’ it denotes the sum of the phenomenal world, of that which has bee, and is, and will be; and society, like art, is therefore a part of nature.”

Stanley concludes that “the changing intellectual climate, the general shift of informed opinion toward scientific views, especially after the publication of Darwin’s Origin in 1859, would have been enough in itself to impel Huxley to speak precisely rather than colorfully, even in popular lectures,” and, “in the absence of conclusive evidence,” he admits, “Mill’s influence must remain conjectural.” It is curious, however, that after the publication of Mill’s essay on “Nature,” there is indeed a dramatic change in how Huxley spoke about Nature. Given that Huxley “knew Mill’s other writings and had a high opinion of them,” and that his “later discussions reflect Mill clearly, sometimes to the extent of employing the same words,” such a conjecture encourages further reflection on the intimate relationship between science and literature in the nineteenth century.

← A Brief Note on Cambridge’s History of Science Volume VII: The Modern Social Sciences
Lay of the Trilobite (1885), by May Kendall →