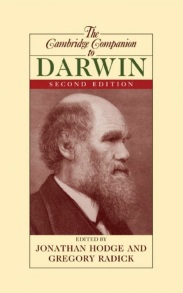 The Cambridge Companion to Darwin aims to provide an “introduction to Darwin’s thinking and to the various and often contentious uses made of his legacies today.” It deals with historical and contextual issues relating to Darwin’s education and achievements, then outlines the ethical, metaphysical, and moral implications of his theory for present-day philosophy. One of Hodge and Radick’s primary objectives is to undercut popular interpretations of Darwin as a “naive, innocent, school-boyish, outdoor, nature-loving traveller and collector, whose theories emerged out of a conjunction of genius, luck and exceptional observational opportunity.” In historical reality, Darwin was indeed “a man of ideas, a thinker, even at times, yes, a philosopher…” 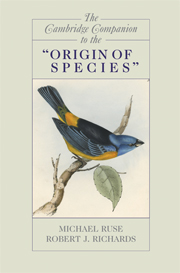 The Cambridge Companion to the ‘Origins of Species’ likewise aims to subvert traditional images of Darwin’s masterpiece. Editors Ruse and Richards gather essays that reconstruct the main arguments of the book, as well as its religious, social, political, literary and philosophical, contexts. According to the editors, “the Origin is still today a work of vital significance and interest.” Indeed, this volumes reveals how the Origin was conceived, developed, and published in dynamic interaction with the broader cultural and social context.

← What was Victorian Doubt?
Historical Essays on the Encounter between Christianity and Science →