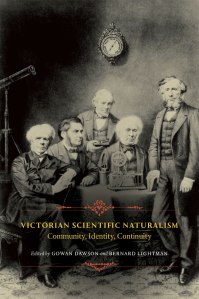 ber of books of recent date have made significant contributions to our understanding of the Victorian coterie known as the scientific naturalists. A comprehensive survey of the last few decades of scholarship in this field can be found in Gowan Dawson and Bernard Lightman’s introduction to their Victorian Scientific Naturalism: Community, Identity, Continuity (2014). Dedicated to Frank Miller Turner, who was one of the first scholars to use “scientific naturalism” as a historiographic category to describe a group of Victorian intellectuals—such as, e.g., Charles Darwin, Herbert Spencer, Thomas Henry Huxley, John Tyndall, William Kingdon Clifford, Francis Galton, Karl Pearson, John Lubbock, Edward Tylor, George H. Lewes, E. Ray Lankester, Henry Maudsley, Frederic Harrison, Leslie Stephen, John Morley, Grant Allen, and Edward Clodd—with the supposed common goal of redefining nature, humanity, society, and science, Dawson and Lightman have collected a group of essays first presented at a workshop on “Revisiting Evolutionary Naturalism: New Perspectives on Victorian Science and Culture” at York University in 2011.

They begin their introduction with an etymological survey of “scientific naturalism,” showing that long before Huxley used it in his Essays upon Some Controverted Questions (1892), it was employed by American evangelicals in the 1840s as a pejorative epithet. In the 1860s and 70s,  Scottish Free Church theologian David Brown and journalist and owner of the Contemporary Review William Brightly Rands also complained that scientific naturalism was the cause of “an inescapable sense of melancholy” and “moral decay” of their time. Only at the turn of the decade, in a letter published in the Secular Review, scientific naturalism was used, seemingly for the first time, as an “entirely positive designation for the scientific rejection of all nonmaterial phenomena.”

Returning to Huxley, Dawson and Lightman highlight his attempt to give the term a lengthy intellectual lineage. More interesting, however, is Huxley’s claim that the Bible is “the most democratic book in the world,” and that its strength lies in its “ethical sense,” and as such the “human race is not yet, possibly may never be, in a position to dispense with it.” In short, Huxley’s strategy was to make scientific naturalism “unimpeachably respectable, scrupulously cleansed of all the deleterious ethical and political connotations it had accrued since first coming into usage in the 1840s.”

Indeed, Huxley’s usage matched earlier connotations of the scientific naturalist, which simply meant being an expert and specialist practitioner of the life sciences. This leads Dawson and Lightman to suggest that scientific naturalism and scientific naturalist were “actor’s categories for much of the nineteenth century,” polemical constructs “employed by both evangelicals and secularists even before it was taken up by the archpolemicist Huxley.”

Dawson and Lightman then turn to twentieth and twenty-first developments. The work of Frank Turner is of course mentioned. But they also point out Robert M. Young’s collection of essays in Darwin’s Metaphor: Nature’s Place in Victorian Culture (1985), where an overarching theme of continuity is pronounced, “pointing out that while natural theology was built on an explicitly theological theodicy, scientific naturalism similarly rested on a secular theodicy based on biological conceptions and the assumptions of the uniformity of nature.” Two years later Lightman published his The Origins of Agnosticism (1987), which argued that “there were many vestiges of traditional religious thought embedded in Victorian agnosticism” and the “possibility that agnositicism originated in a religious context.” They also mention the influential work of Ruth Barton, especially her essays on the X-Club, John Tyndall, and the origins of the scientific journal, Nature.

More recently, historians of science have begun marginalizing Turner’s notion of an emerging, professional scientific elite. Adrian Desmond’s The Politics of Evolution (1989), Ann Secord’s “Science in the Pub” (1994), James Secord’s Victorian Sensation (2000), John van Wyhe’s Phrenology and the Origins of Victorian Scientific Naturalism (2004), and Lightman’s Victorian Popularizers of Science (2007), pushed “back the establishment of a secular naturalistic tendency in British science into the 1830s and 1840s,” essentially placing the scientific naturalists on the periphery. We should add here Lightman’s own collection of essays on Evolutionary Naturalism in Victorian Britain (2009), which examined the enduring strength of religion in the late nineteenth century and the vestiges of religious thought among the scientific naturalists, the problems of communicating their message to the general public, and Victorian critics of scientific naturalism and their strong resemblance to postmodern criticism.

Despite being pushed to the periphery in modern scholarship, Huxley and the scientific naturalists continue to fascinate. Paul White’s Thomas Huxley: Making the ‘Man of Science’ (2003) demonstrates that Huxley’s self-identity was “drawn, in part, from his understanding of domesticity, literature, and religion.” Dawson‘s own Darwin, Literature, and Victorian Respectability (2007) shows how advocates of scientific naturalism constructed “their model of professional scientific authority in line with their opponents’ standards of respectability.” Here again we should also add Lightman and Machael S. Reidy’s The Age of Scientific Naturalism (2014), which focuses on physicist John Tyndall, but also contains exemplary essays on Herbert Spencer and the metaphysical roots of his evolutionary naturalism, William Clifford’s use of Spencerian evolution, and many others.

“The time is right,” writes Dawson and Lightman, “to return to those canonical figures, in the light of the new scholarly agendas, and reevaluate their status as icons of the Victorian scientific scene.” With a focus on “forging friendships,” “institutional politics,” “broader alliances,” and “new generations,” this volume of essays offers “new perspectives on Victorian scientific naturalism that…produce a radically different understanding of the movement centering on the issues of community, identity, and continuity.”

← Scientific Epistemology as Moral Narrative
The Age of Scientific Naturalism →