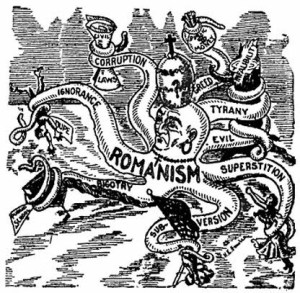 The last few days I have been exploring anti-Catholicism in the nineteenth century. Hugh McLeod, in his Secularisation in Western Europe, 1848-1914 (2000), in his chapter on “Identity,” observed that a general feature of nineteenth-century Protestantism was marked by a pervasive anti-Catholicism. A number of other scholars have also noted a pronounced anti-Catholicism in the Victorian era. An older, but still useful, study of this tradition is E.R. Norman’s Anti-Catholicism in Victorian England (1968). In more recent times, historian of religion John Wolffe’s The Protestant Crusade in Great Britain 1829-1860 (1991), Hartmut Lehmann’s “Anti-Catholic and Anti-Protestant Propaganda in Mid-Nineteenth-Century America and Europe” (1991), and D.G. Paz’s Popular Anti-Catholicism in Mid-Victorian Britain (1993) offer additional insight. More recently, Marjule Anne Drury’s 2001 review article, “Anti-Catholicism in Germany, Britain, and the United States,” in Church History (2001), provides a helpful bibliography of the transnational character of anti-Catholic discourse then raging in the nineteenth century. Finally, in a series of fascinating articles in the 2013 issue of European Studies, demonstrate how “anti-Catholicism was a transnational cultural phenomenon, and similarly negative accusations and stereotypes regarding Catholicism existed in a number of countries.” In their introduction to the issue, Yvonne Maria Werner and Jonas Harvard provide a brief outline of the origins of anti-Catholicism in early modern Europe, beginning with the principle cuius region, eius religions of the Peace Treaty of Westphalia in 1648. According to Werner and Harvard, “anti-Catholicism as well as anti-Protestantism was…part of the legal and cultural system of the time, and in several countries it was bound up closely with questions of monarchical succession.” By the nineteenth century, with religion increasingly becoming a “private matter,” anti-Catholicism began “shifting to target the Catholic Church and the papacy on matters of national integrity, progress and modernity.” Or, as John Wolffe puts it in his article in the issue, in England “much of the animus that had earlier been directed against the Roman Catholic Church was now focused on ritualist clergymen in the Church of England, who were seen as advancing Popery by subverting the Protestantism of the establishment from within.” 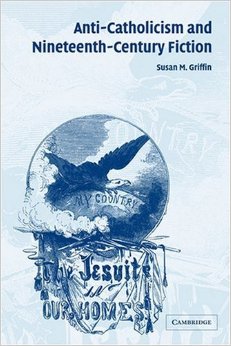 Opposition to “popery” was of course not a new feature of life in nineteenth-century Europe. Fear of Catholicism extends as far back as Protestantism itself. A number of historical events in the nineteenth century, however, increased the intensity of anti-Catholic sentiment. The passing of the 1829 Catholic Emancipation Act; the Anglo-Catholic Oxford Movement in the 1830s, led by John Keble, John Henry Newman, and Edward Bouverie Pusey; Newman’s Tract XC in 1841 and later his conversion to Catholicism in 1845; the “no Popery” movement of 1850-51; Irish immigration; the notorious pastoral letter, “Flaminian Gate,” from Archbishop of Westminster Cardinal Nicholas Wisemen; and a lecture entitled “The Decline of Protestantism, by John Hughes, Catholic Archbishop of New York, all played a role in increasing hostilities between Protestants and Catholics.

Anti-Catholicism was undoubtedly a significant feature of the Victorian period. It was manifested in sermons, petitions, tracts, pamphlets, newspapers, and magazines. But as other recent scholarship has demonstrated, it was decisively through fiction that anti-Catholicism was largely disseminated. Susan Griffin’s Anti-Catholicism and Nineteenth-Century Fiction (2004) and Diana Peschier’s Nineteenth-Century Anti-Catholicism Discourses (2005) persuasively argue that the Victorian novel dramatized the supposed evils of Catholicism. As Griffin argues, the Protestant obsession with Rome was “distilled to provide Victorians with a set of political, cultural, and literary tropes through which they defined themselves as Protestant and therefore normative.” From Sarah Josepha Hale, Charlotte Bronte, Benjamin Disraeli, Henry James, Frances Trollope, and Charles Kingsley, Victorian fiction provided plots, characters, and imagery for an anti-Catholic imagination.