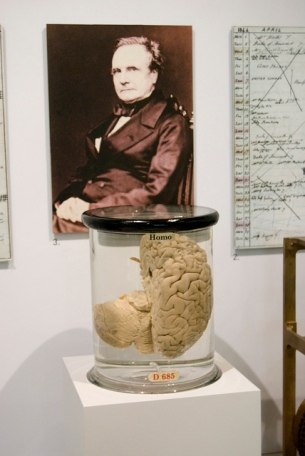 Charles Babbage’s brain in a vat at the Hunterian Museum

When he died, Charles Babbage (1791-1871), English polymath, mathematician, philosopher, engineer, and the “father of the computer,” donated one half of his brain to the Royal College of Surgeons, where it still sits in display today in the Hunterian Museum. The other half resides in the computing galleries of the Science Museum in London.

Fittingly, Babbage is the subject of Secord’s next chapter in Visions of Science (2014), and particularly his Reflections on the Decline of Science in England (1830), including his later Economy of Machinery and Manufactures (1832). With the death of Davy in 1829, “the loss of such a celebrated discoverer led to fears that the momentum achieved early in the century was petering out.” The most well-known, if not notorious, lament came from the pen of Babbage. According to Secord, the Decline of Science “portrayed English science as moribund and corrupt, and looked to the Continent, especially France, for models of scientific reform.”

The ‘Calculating Engine’ by Babbage

In the early twentieth century, historians of science such as George Sarton, Alexandre Koyré, Herbert Butterfield and others, would have said no. “Science,” Sarton said, “was about the production of truths, not technologies.” Koyré maintained that the great minds of the past, such as Galileo or Newton, were not engineers or craftsmen. Technological improvement was incidental, a mere by-product of the progress of science.

This view, it has been claimed, was a reaction against Marxist histories, which portrayed science as the offspring of economic and technological development. Marxist historians Boris Hessen, Edgar Zilsel and others, argued that the impetus behind modern science was its economic utility. This, in a qualified sense, was none other than Francis Bacon’s (1561-1626) view. Indeed, Bacon insisted that natural philosophy should be cultivated and put into the service of the commonwealth. Likewise, the founding of the Royal Society of London fostered a utilitarian view of science.

By the eighteenth century, France in particular sought to harness the technological potency of the sciences. New institutions such as the École Polytechnique, for example, were designed, write Peter J. Bowler and Iwan Rhys Morus in a different work, “to deliver an education in natural philosophy (to army cadets in particular) that was fully expected to result in technological and engineering expertise” advantageous to the state.

And here is where Charles Babbage enters the stage. His Decline of Science was an invective against the Royal Society for not pursuing science as the French and Germans had done. There was something “rotten in the [English] system.” Babbage was not alone in his critique, however. A number of newspapers, magazines, reviews, and pamphlets, including the Morning Chronicle, Lancet, and The Times, took note of the mismanagement of the Royal Society. Many saw it as a “bloated monopoly,” and called for the formation of new scientific societies, such as the Astronomical Society and Geological Society, a more “reformed, mathematically refined, and secure version of the subject.”

To this end, Babbage felt justified in naming names. That is, he sought a “public accounting” of the failures of specific members of the Royal Society. For example, in his Decline of Science he attacked specifically astronomer Edward Sabine as a charlatan. He justified his public character assassinations by arguing that “a true philosopher, faced by accusation of corruption and forgery, would remain calm. Only those with something to hid would react badly; openness was a sign of honesty.” This was polemic at its finest.

But Babbage, by attacking the of governance, leadership, and organization of the Royal Society, aimed at something bigger. As Secord writes, “reform of the Royal Society served as a model of what needed to be done more generally in politics and the emerging industrial economy.” Observation is relative. Thus Babbage called for a mechanism that would “calibrate observations.” More importantly, there was the problem of fraud. This included, says Secord, “hoaxes, forging, trimming, and cooking.” How does one ameliorate such a disease? By making science completely open. It must be open to adepts and experts alike. It must be, in short, public. And finally, moral character must be essential. “Freed of human subjectivity and foibles, the pursuit of knowledge would be manly ans secure, a suitable model for political action.”

In his next book, On the Economy of Machinery and Manufactures, Babbage targeted the dirty secrets of the book trade, and, in much the same way he did with members of the Royal Society, he very publicly attacked specific publishers and printers for their moral shortcomings. But all this came at a cost. In 1832 he accepted the nomination as a Whig parliamentary candidate for Finsbury. He lost to the Tories. “Many readers,” writes Secord, “were uncomfortable with the praise Decline heaped on foreign governments that gave honours, money, and status to scientific men.” Men such as William Robert Grove (1811-96), William Whewell (1794-1866), and George Bidell Airy (1801-92) were not as enthusiastic as Babbage was for the Napoleonic regime. Whewell and Airy, for example, saw “no merit in Babbage’s argument that state funding for science was essential to ensure continued technological progress.” Babbage seemed to bestow too much power to the state.

Even more disconcerting, however, Babbage seemed to invoke the trope of conflict between science and religion. As Secord notes, “the promotion of the use of knowledge for human needs, would best be served by secular—not religious—education; for among the unenlightened, even true religion was tinged by ‘superstition’ and developed irrational habits of thought.” Indeed, it seemed that Babbage maintained that science and the state would solve all problems: “Ministers of the state, with minds shaped by reason rather than tradition, would then be in a position to give scientific men the opportunities they needed for the research that would reshape the economy.”

Secord concludes this chapter with some comments that beg further explanation. For example, Babbage seemed to think that although mankind was the masterpiece of “divine power,” “other planets still loftier forms of intelligence will have appeared, the product of the same laws of nature.” For this “Almighty architect” had created the universe by a process akin to a calculating engine. And what “looked to ordinary observers like miracles of creation could be understood by the man of science as the intelligent actions of a divine machine.” Secord says no more than this about Babbage, thus leaving his reader wondering what, then, was Babbage’s religious views?