Michael Hunter, the leading expert and custodian of Robert Boyle’s (1627-91) legacy, delivered a paper last night at a seminar here at the University, entitled “‘Physica Peregrinans’: Robert Boyle, His Informants and the Role of the Exotic in Late Seventeenth-Century Natural Philosophy.” Hunter examined Boyle’s records of interviews he conducted with travelers returning from exotic locations throughout the world. Boyle intended to publish these interviews in a book, Physica Peregrinans, or “The Traveling Naturalist: Containing Answers given to Severall Questions propunded by the Author to Navigators & other Travellers in remote Countreys .” During the Q&A, it became apparent that Boyle rejected the scholastic, Aristotelian approach to common experience. According to Hunter, for Boyle “nature was in fact often surprising and exciting in its fecundity and variety, and people’s conception of what was possible needed to be expanded accordingly.” Equally noteworthy, it seems that Boyle used empirical investigation in support of the supernatural in nature—that is, he offered “a natural history of the supernatural,” as Peter Harrison put it during the discussion following the paper. 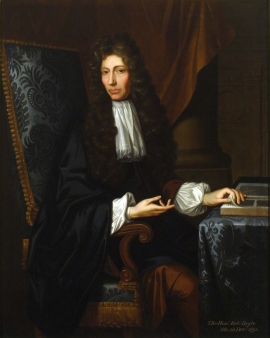 My knowledge of Hunter’s work on Boyle is limited. I have read Hunter’s “The Social Basis and Changing Fortunes of an Early Scientific Institution: An Analysis of the Membership of the Royal Society, 1660-1685,” a lengthy essay published in Notes and Records of the Royal Society of London in 1976. Hunter would go on to greatly expand this piece into his well-known The Royal Society and its Fellows, 1660-1700: The Morphology of an Early Scientific Institution (1982). The only other work of Hunter’s I’ve perused was his 2007 article in the British Journal for the History of Science, “Robert Boyle and the Early Royal Society: A Reciprocal Exchange in the Making of Baconian Science.”

So after the talk I paid a visit to the University library and found Hunter’s more recent work on the great English scientist, Robert Boyle: Between God and Science (2009). Boyle, who ranks with Isaac Newton, Michael Faraday, and Charles Darwin as a seminal figure in the history of science, was also a deeply, and resolutely, religious man. As Hunter wrote in his article on Boyle in the Oxford Dictionary of National Biography (2004), “The central fact of Boyle’s life from his adolescence onwards was his deep piety, and it is impossible to understand him without doing justice to this.”

In his Robert Boyle: Between God and Science, Hunter aims to bring this fact out. As a natural philosopher, Boyle not only dabbled in all branches of physics, he also experimented in alchemy, anatomy, botany, biology, medicine, and mathematics. He wrote on epistemology and moral philosophy, on scientific method and scientific theory, and just as vigorously labored with biblical exegesis and theology. Indeed, his first two published books were Some Motives and Incentives to the Love of God (1659) and New Experiments Physico-Mechanical, Touching the Spring of the Air and its Effects (1660). Natural philosopher and religious apologist, Boyle sought to justify the ways of God to men.

Like most men, however, Boyle did have doubts. Richard S. Westfall, in his Science and Religion in Seventeenth-Century England (1958), had made much of these doubts. In answering hypothetical atheists, he argues, Boyle attempted to satisfy his own doubts about the implications of the new science. But as Hunter points out, doubt had a positive role in Boyle’s faith. Boyle once wrote, for instance, that those “whose Fayth hath never had any Doubts, hath some cause to Doubt whether he hath ever had any Fayth.”

Boyle was so committed to his faith that, upon the urging of Archbishop Ussher, he learned Greek, Hebrew, Syriac and Aramaic in order to read the Bible in its original languages. Hunter even suggests that Boyle’s interest in natural philosophy and experimentation was largely spurred by his concern to combat the rise of atheism and materialism.

Boyle’s religion was central to his vocation and vision of science. “For Boyle,” Hunter writes, “science and theology were truly complementary.” But as with Copernicus, Kepler, Newton, and other seminal figures in early modern science, Boyle’s “successors found it easy to adopt his methodological prescriptions and his mechanistic worldview in conjunction with only a vestigial form of his passionate theism.” But that is not the real Robert Boyle. He was, as Stephen D. Snobelen puts it in his clever summary of Hunter’s book, the

Seventh son, gentleman, wealthy landowner, Etonian, visitor to the Continent, Protestant educated, multilinguist, moralist, alchemical adept, forerunner of modern chemistry, champion of experimental philosophy, popularizer of the air-pump, promoter of natural philosophy, early Fellow of the Royal Society, formulator of what came to be called ‘Boyle’s law’, proliﬁc author, citizen of the Republic of Letters, a director of the East India Company, principled lifelong celibate, medical reformer and practitioner, hypochondriac, man of tender conscience, man of charity, pious believer, Bible reader, lay theologian, apologist for reasonable Christianity, high priest of nature, advocate of natural theology, founder of the eponymous lectureship in defence of the faith, backer of foreign Bible translations, supporter of overseas missions and governor of the Corporation for the Propagation of the Gospel in New England—Boyle was all of these things and more.