Darwin and the Divine Programmer

Many have attempted to explain the inspiration and origins of Charles Darwin’s theory of evolution by natural selection. One recent attempt comes from Dominic Klyve in his 2014 article “Darwin, Malthus, Süssmilch, and Euler: The Ultimate Origin of the Motivation for the Theory of Natural Selection,” published in Journal of the History of Biology. While Darwin was undoubtedly inspired by Thomas Malthus’ Essay on the Principle of Population, Malthus’ own ideas about geometric population growth derived from the work of German Protestant pastor and demographer Johann Peter Süssmilch (1707-67) and Swiss mathematician Leonhard Euler (1707-83). According to Klyve, it is here, in the work of Süssmilch and Euler, where we find the “ultimate” origins of Malthus’ geometric theory, and therefore Darwin’s theory of evolution by natural selection.

Interestingly enough, both Süssmilch and Euler were strong physico-theologians. Süssmilch, for example, believed the purpose of demography was the “study of the laws (that is, the ‘divine order’) which manifest themselves in mortality, fecundity, and the propagation of the human species, and which can be analyzed using the statistics of deaths, marriages, births, etc.” As Klyve puts it, Süssmilch “believed that population across Europe and the world was slowly increasing, and that this was due to the handiwork of God.” Euler too believed population growth was an example of “divine order.”

According to Klyve, Darwin needed three things to rightly conceptualize his theory of natural selection: time, rapid population growth, and stability. While the old age of the earth was demonstrated by Lyell’s work, the other two pieces come from Süssmilch and Euler.

While Klyve may have secured a spot for Euler in the intellectual history of Darwin’s work, I am more convinced that another mathematician may have played a similar, if not greater, role in Darwin’s ideas: Charles Babbage. 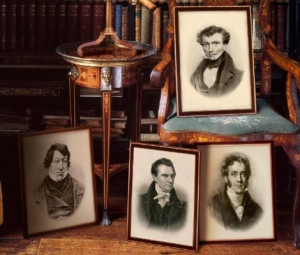 This past week I have been reading Laura J. Snyder’s engrossing tale of the Philosophical Breakfast Club: Four Remarkable Friends who Transformed Science and Changed the World (2011). The Philosophical Breakfast Club was the creation of four Cambridge men, William Whewell (1794-1866), Charles Babbage (1791-1871), John Herschel (1792-1871), and Richard Jones (1790-1855). These four Cambridge friends met together on Sunday mornings after chapel to discuss Francis Bacon, reforms in knowledge, society, and science. All four would become central to the founding of the British Association for the Advancement of Science (BAAS) in 1831.

In Chapter 8 of this book, “A Divine Programmer,” Snyder gives a fascinating account of Darwin attending one of Babbage’s popular Saturday evening soirées. It was Lyell who had invited Darwin to Babbage’s dinner party, which were, as Darwin later put it in a letter to his sister “the best in the way of literary people in London—and that there is a good mixture of pretty women!”

These parties were also something of a gastronomic affair (much like the BAAS meetings were). According to Snyder, a “table would be laid with punch, cordials, wine, and Madeira; tarts; fruits both fresh and dried; nuts, cakes, cookies, and finger sandwiches…oysters, salads, croquettes, cold salmon, and various fowls.” There was also dancing, music, and literary, artistic, and scientific amusements. But most important of all was Babbage’s demonstration of his Difference Engine.

On this particular evening, with Darwin present in the audience, Babbage, according to Snyder, gave something of a sermon. In describing his machine, Babbage related God as a divine programmer:

“In like manner does God impress His creation with laws, laws that have built into them future alterations in their patterns. God’s omnipotence entails that He can foretell what causes will be needed to bring about the effects He desires; God does not need to intervene each and every time some new cause is required…God, then, is like the inventor of a complex, powerful calculating engine.”

Ignoring for the moment Babbage’s own god-complex, his image of God as programmer, who had, as Snyder puts it, “preset his Creation to run according to natural law, requiring no further intervention,” would lead to a remarkably different view of the relationship between science and religion in the nineteenth century—one that would dramatically alter Darwin’s own view of God’s agency in the natural world.

Babbage’s own view emerged from a confrontation he had with his Cambridge friend Whewell and his Bridgewater treatise, to which Babbage would later add his own, unauthorized work to the series. Indeed, as Snyder observes, Babbage constructed his engine with the purpose to “counter Whewell’s view of miracles as interventions of God outside natural law.”

But Snyder’s most salient point in this chapter is that before attending Babbage’s Dorset Street soirée, Darwin was already struggling with the species question. In fact, Darwin had just returned from his voyage on the Beagle when he was invited to Babbage’s party. “At the very moment he was introduced to Babbage and his machine,” she writes, “Darwin was questioning the fixity of species and the prevalent notion of special creation.”

Just as Babbage anticipated changes and modifications in his machine, he imagined God as a programer and inventor, who would have anticipated changes in creation. Darwin, Snyder suggests, “would have seen how Babbage’s view of a divine programmer gave him a way to reconcile his beliefs in God with his growing sense that new species arose from old ones in a purely natural, evolutionary process.” But in time, however, Darwin and many others would come to think that nature did not need a divine programmer at all.

1 Comments on “Darwin and the Divine Programmer”